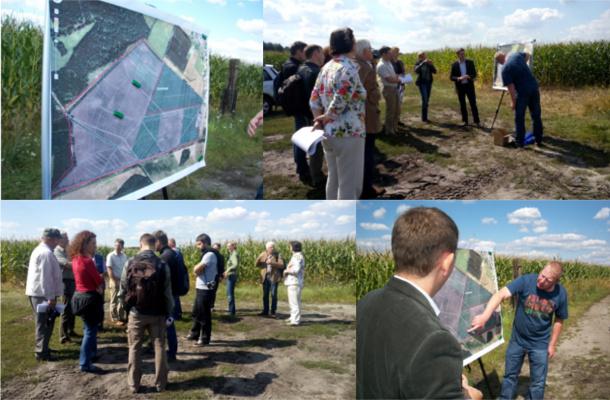 Although agroforestry on arable farms is not a common practice in Germany, alley cropping systems for woody biomass production are receiving increasing interest due to the potential to produce biomass and agricultural crops at the same time. In Germany alley cropping systems combine rows of fast growing trees (for example poplar, willow or black locust) with agricultural crops. This system exists only at the experimental field level at present, but it is hoped that through AGFORWARD the challenges to the wider adoption of alley cropping can be addressed.
If you would like to know about the activity of this group, please contact Dr Jaconette Mirck ( mirck@tu-cottbus.de ) or Penka Tsonkova ( penka.tsonkova@tu-cottbus.de ) at BTU Cottbus-Senftenberg.

The first meeting of the stakeholder group was held on 28 August 2014, and was attended by 18 stakeholders. The meeting was organized jointly with the project AUFWERTEN of the BTU Cottbus-Senftenberg, and focused on facilitating the implementation of agroforestry in Germany. The meeting was attended by a mix of farmers, policy makers and representatives from farmer associations, private business, conservation bodies and BTU Cottbus. The positive aspects of agroforestry systems focused on crop production and soil conservation. The administrative burden and management costs were seen as negative aspects. The meeting raised a number of potential challenges to the establishment of alley cropping systems including: appropriate choice of species and spacing between trees, and the long-term outlook of the system. These were considered, amongst others to be possible future research themes.

An initial report was produced in September 2014.

A protocol was produced in March 2015.

A system description report providing an update on the research was produced in October 2015.

In a report produced in August 2017, Michael Kanzler and Jaconette Mirck describe the results of the experimental work.  The establishment of lines of short rotation coppice (SRC) within an arable field (in the year after SRC harvest) reduced the wind speed in the centre of the 24 m, 48 m, and 96 m alleys (relative to a neighbouring open field) by 32%, 29% and 21% respectively.  Compared to  sugar beet in an open field, the sugar beet yields in the alleys were reduced within 3 m of the SRC, but sometimes there was an increase in sugar beet yields at a distance of 9 m or greater from the rows.