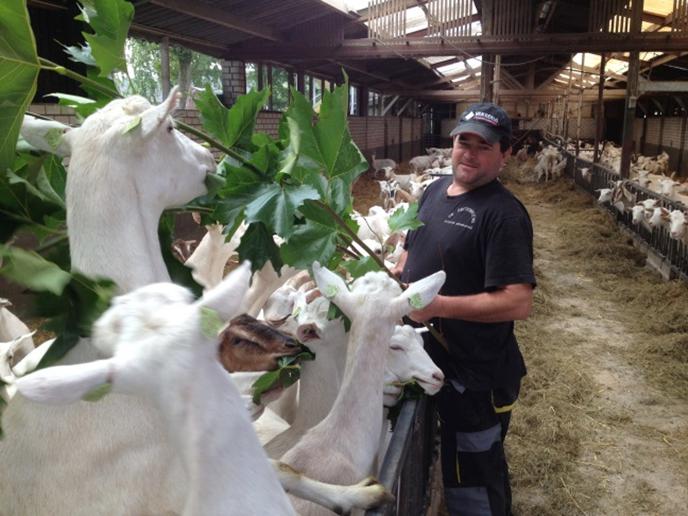 Fodder trees for cattle and goats in the Netherlands

Several dairy cow and goat farmers in the Duinboeren region of the Netherlands were participants of the Farms’ Network for Fodder Trees and Multifunctional Land Use (2012-2014). During that project four test sites with fodder trees were planted on four farms. Within the original project dairy goats and cows were allowed to browse on fodder trees such as willow (Salix spp).

The four farmers using fodder trees were interviewed on 11 September 2014. The most positive aspect of using fodder trees was viewed as improved animal health and welfare. The key negative issue was weed control in the establishment of the willow. Potential research themes were protection of browsing trees, the selection of fodder species, and system design.

If you would like to know about the activity of this group, please contact Boki Luske B.Luske@louisbolk.nl of the Louis Bolk Institute, Netherlands.

An initial research and development protocol was produced in April 2015.

A system description report providing an update on the research with ruminants and fodder trees was produced in November 2015.

In August 2017, Boki Luske and colleagues at the Louis Bolk Institute summarised the lessons learnt from their research on using tree fodder with dairy cattle in the Netherlands. The research focused on measuring several functional aspects of willow (Salix viminalis) and alder (Alnus glutinosa) trees in a case study. The intake of leaves and twigs by dairy cows was estimated by a browsing experiment on an organic dairy farm. In this particular trial the cows preferred willow leaves to alder leaves. Willow cultivars which have a wide spreading habit were able to provide a “fodder hedgerow” with many growing points within the reach of the cows. Wide growing willow trees enable three dimensional grazing.

Additionally, the nutritional value of the leaves was determined from leaf samples and from a literature study. In general, the willow and alder leaves were found to have higher protein, macro- and micro-element levels than grass. The intake rate of willow was only 0.6 and 0.4% of the required dry matter intake for dry and lactating cows respectively. However the intake of, for instance, sodium (Na), zinc (Zn), manganese (Mn) and iron (Fe) was 2-9% of the daily requirements.

The willow and alder trees also play a functional role in relation to soil fertility and initial measurements were taken of soil organic matter, nitrogen and phosphorus below the trees compared to the grass. Significantly higher earthworm numbers and earthworm biomass were found in the soil under the alder trees than under the willow trees.