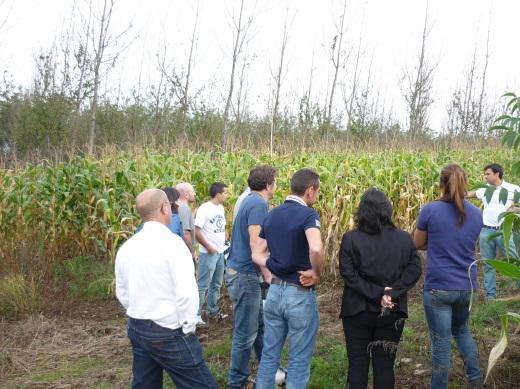 An initial stakeholder meeting, with 14 participants, was held in Galicia on 21 October 2014. The most positive aspects of the silvoarable system were perceived to be the business opportunities, the originality and interest, the feasibility of the project, the diversity of products, and the general environmental benefits. The negative aspects included the complexity of work, and labour and management costs, and losses due to wildlife. Integrating trees, maize and medicinal plant production, and issues of tree protection from animals were identified as possible areas for research.

The University of Extremadura in Spain has also established a stakeholder group which is interested in integrating cereal production and high value walnut production. The initial stakeholder meeting is reported in work-package 3. However some aspects of the work is particularly focused on comparisons between different varieties of wheat and barley beneath walnut.

If you would like to know about the activity of this group, please contact Prof.María Rosa Mosquera Losada (mrosa.mosquera.losada@usc.es)or Dr Gerardo Moreno (gmoreno@unex.es)

An initial stakeholder report, focused on silvoarable systems in Galicia in Spain, was produced in October 2014.

María Guadalupe Arenas-Corraliza, María Lourdes López-Díaz and Gerardo Moreno have completed a lessons learnt report describing the details of a comprehensive set of measurements looking at the interactions between growing walnut trees and wheat and barley crops in Mediterranean Spain.

A shading experiment demonstrated that barley and wheat yields in Mediterranean Spain could be increased with partial or 50% shade, compared to yields in full sunlight.  Under some particularly dry and hot years, when the yield of the monoculture barley crop was particularly low, growing the barley within the trees increased barley yields.  The effect on barley yields was more positive than that on wheat yields, because the barley crop can complete much of its development before significant leaf growth on the walnut trees.  By contrast in cooler and wetter seasons, the highest barley and wheat yields were obtained from the monoculture crop.  Measurement of tree growth, also indicated that the cereals reduced tree growth; it is possible that this could be prevented through the use of irrigation. In summary, the results demonstrate that barley yields in particularly dry and hot years can be maintained through the use of tree cover.

Rosa Mosquera-Losada and colleagues at the University of Santiago de Compostela have produced two reports.  The first describes the responses of maize intercropped between wild cherry trees (Prunus avium L).  In an experiment where the trees had been planted in 2008 at interrow spacings of 1.25, 2.5 and 5 m, the total dry biomass produced by intercropped maize (per cropped area) of 4.4 to 14.0 t/ha, was lower than the approximately 25 t/ha of biomass produced in plots without trees due to the spaced occupied by the tree rows.  Maize has a “C4” photosynthetic pathway and can respond positively to high light levels.  There is a recommendation to test the shade responses of maize varieties to increase production under shade.

The second report focuses on the response of two medicinal crops (Melissa officinalis L. and Mentha x piperita L.) intercropped between wild cherry trees.  The yields, although low at 0.3-0.7 t/ha, are similar to those obtained in other studies in open sites.  Hence they appear suitable agroforestry crops. The concentration of Rosmarinic acid in the leaves of Melissa officinalis was higher when the crop was grown under a high density, rather than a lower density, of trees. This may be explained because the concentration of Rosamarinic acid is higher before flowering and tree shade delays flowering.