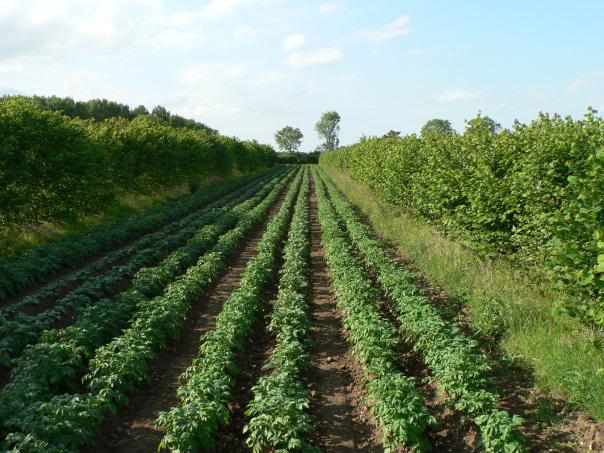 Silvoarable agroforestry in the UK

Silvoarable systems are currently rare in the UK. The few systems that exist are usually based on an alley cropping design with arable crops in the alleys. The tree component consists either of top fruit trees (apples, pears and plums), timber trees, or coppice trees for woodfuel.

On 18 November 2014, a stakeholder workshop focused on silvorable agroforestry in the UK was held at Wakelyns Agroforestry in Suffolk. It was attended by nine stakeholders including seven arable farmers. Wakelyns Agroforestry is an organic silvoarable research site that was established in 1994 on 22.5 ha on the Suffolk/Norfolk border in eastern England (52.4°N, 1.4°E). It incorporates hazel and willow coppice, and a mixed timber and fruit tree system, with cereals, potatoes, field vegetables and fertility-building leys in rotation within the alleys. At the end of the workshop, the participants identified possible research themes for future research including the role of agroforestry in reducing pest damage and hence pesticide use, and the choice of tree species.

If you would like to know about the activity of this group, please contact Dr Jo Smith jo.s@organicresearchcentre.com

An initial report was provided in November 2014.

Two protocols were produced in April and June 2015.
The first protocol focuses on the testing of cereal mixtures and the second focuses on understorey management of the tree rows.

Two system description reports were produced in April 2016.
The first system report focuses on the testing of cereal mixtures and the second focuses on the understorey management of tree rows.

Jo Smith and colleagues at the Organic Research Centre in the UK have produced two “Lessons Learnt” reports on silvoarable systems in the UK.

The first report focuses on research at Wakelyns Agroforestry in Suffolk.  Although willow has been widely promoted in the UK, their research shows that under the relatively dry conditions in Suffolk, the biomass and bio-energy yields of hazel can be as high as that for willow.  The effect of lines of SRC on spring oats, barley, and wheat yields were examined within a long-term programme investigating the effects of an evolutionary plant breeding approach.  With the possible exception of the oats,  the yield of each crop declined with greater proximity to uncoppiced tree rows.  The last part of the report demonstrates how the Yield-SAFE model can be used to describe the biomass production of crops and willow over time in different configurations.

The second report focuses on a silvoarable system at Tolhurst Organics in Berkshire, where rows of eight tree species (with an inter-row width of 20 m) were planted in March 2015 within an area used for organic vegetable production.  The trees established well with only a 5% failure rate, but tree protection was needed to minimise deer damage.  A focus of the study was on the biodiversity related to the tree rows, and six types of vegetation cover were examined including a long-term beetle bank,  natural regeneration, and four types of legume mixtures.  In the first year, the long term beetle bank had the highest number of floral species but by the second year many of the treatments had similar levels of floral species. In total, 75 different plant species were recorded over the three-year period. The report also examines the effect on ground invertebrates and earthworms.  The last part of the report looks at the costs of establishing the tree rows and the opportunities for including marketable crops within the tree rows.